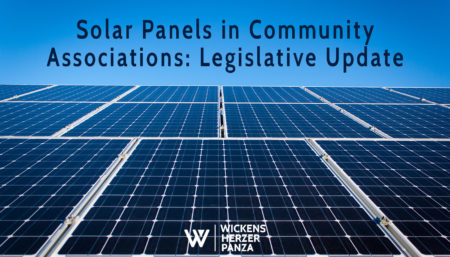 By Amanda A. Barreto, Esq.

If your condominium or homeowners association does not already have a policy on solar panel installation and placement, it may be time to institute one—especially if House Bill 20 goes anywhere in Columbus.

On February 12, 2019, House Bill 20 was introduced in the Ohio House of Representatives seeking to prevent condominium, homeowner, and neighborhood associations from imposing unreasonable regulations on the installation of solar panels on roofs and exterior building walls. If passed, the law would allow individual condominium unit owners and homeowners to install solar panels on the roof or exterior wall of the building or home, subject to reasonable rules set by the association. What is reasonable can be subjective, but thankfully Ohio courts have given guidance to community associations on the reasonableness requirements of their rules (i.e. whether the rule is arbitrary, even-handed, and made in good faith for the common welfare of the members).

The proposed law would prohibit association rules from significantly increasing the cost or decrease the efficiency of the solar panel system.  Additionally, the proposal states that solar panels may be installed if there is “no competing use of the roof or exterior walls.”

While many homeowners are in favor of energy-saving solutions, the proposed law could not only change the look and aesthetics of the community, it could also create maintenance and insurance nightmares for the association.  If passed, Ohio associations may want to look at Florida and California for guidance on the issue, as those states have already implemented these types of requirements for associations.

At this point, the proposed law is still in the House State and Local Government Committee and no hearings are scheduled.  In the meantime, it may be a good idea for your community association to create a solar panel policy.